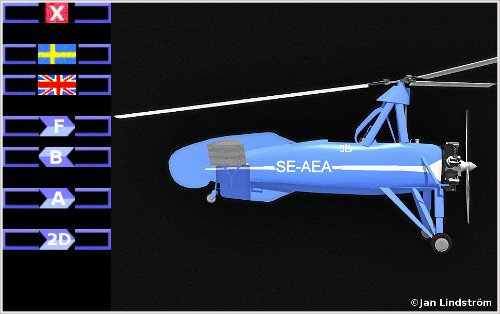 A software that make a presentation to an autogyro (autogiro, gyrocopter) model Cierva C30. This with  2D- and 3D-images, and text both in English and Swedish. It can be downloaded for PC (Linux, Windows). Content from this program can also be found in the Android-app JLs3D. Download HERE.

Juan was from Spain, and the inventor of the Autogyro. Before WW1 was he a builder of gliders, and working on how to prevent planes going into stall. 3 prototypes of autogyros was constructed during 1922. The fourth (Januari 1923) became the first to reach the air. First versions had stiff rotor-blades, which moved faster against the wind. When in work the rotor then start to shake and become very instable. To solve this was the blades allowed to move a little. The rotor will then self-adjust in the air.

A new model (C5) became the last build in Spain. For financial and production reasons, moved he then to England. Together with Avro build he then C6A. The autogyros body came from an Avro 504. Rolf von Bahrs first autogyro was an C19. It had wings and where controlled by rudders, as an ordinary plane. SE-AEA was of a later type (C30), introduced in 1933. The steering are from now, just by tilting the rotor.

Cierva died in an flying-accident 1936. This during take-off with an DC-2. He ended his life in an ordinary aeroplane, although much of his work with autogyros ment to make flying safer.

Rolf was born 1912 in Stockholm. His father became attaché (Swedish Navy) in the UK. Some of his schooldays where therefore spent there. Years later where Rolf back in England, to become an pilot at Heston Airport. At the same place performed Cierva tests on his autogyros. Had Rolf knowledge of this before he arrived?. The airship Graf Zeppelin visited the airstrip, and here commander Dr. Eckener where very positive regarding autogyros. A mere chance or not, it may have changed this history.

When Rolf returned home, he started with the Dieden brothers, AB Autogiroflyg. The first own autogyro was an C19 (SE-ADU). 1934 followed SE-AEA, at the same time became he the single owner of the company. Through the years where he then working for both civil and military costumers. Work as reconnaissance on u-boats, mines, icebound ships. Also aerial photo, conveyance of patients and flying skiers up to the top of the slope.

At the most had Rolf 7 autogyros. With 7-8000 hour in the air, became he the no.1 autogyro-pilot. He was also present at Croydon when Cierva died. He left the rest of us in 1988.

The hanging control column does all the steering, while airborne. This by tilting the rotor. The rotor can before flight be spun up to 175-200 rpm. For this purpose will a shaft with a quick-release, for a short moment, connect the rotor with the engine. This will shorten the take off run. The tailplane has positive aerofoil camber on starboard side, and the opposite on port. This counteracts the torque of the rotor, when flying forward. The tailwheel are steerable by rudder pedals.

The following comes from the book The Autogiro (1930). Published by an American manufacturer, promoting their variants. The rotor don't have to have 4 blades. Autogiros can be without main wings. Notable is also that helicopters being described as experimental. Which was no lie then. 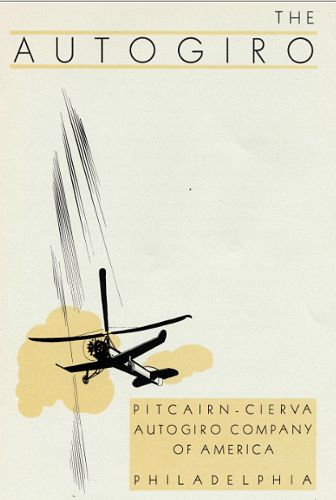 DESCRIPTION  OF  THE  AUTOGIRO  AND  ITS  PERFORMANCE

THE AUTOGIRO is fundamentally a heavier-than-aircraft, deriving its lift from the rotary movement of its supporting surfaces through the air. It differs primarily from the airplane in that its supporting surfaces or blades are free to move at a speed independent of the machine as a whole, thereby introducing flying characteristics hitherto impossible of accomplishment. Thus the Autogiro can take off at a low speed after a very short run and immediately assume a sharp angle of climb; it can fly at either low or high speeds and can momentarily be brought to a standstill in the air.

The Autogiro is capable of vertical descent at a velocity slower than a man descends in a parachute. This descent is perfectly stable because of its pendular stability without oscillation. The Autogiro is so balanced that it also can be made to glide "nose down" like an airplane by a forward motion of the control. As a result of these characteristics, little skill is required to finally land with virtually no forward speed and with a shock so slight as to be easily absorbed by the landing gear.

The rotor system is the essential characteristic of the Autogiro and gives it its name. It furnishes approximately 80% of the lift at high forward speed and 100% in vertical descent. It consists of a set of four hinged blades mounted on a hub which rotates on ball thrust bearings set on a pylon structure above the fuselage. These blades rotate freely under the aerody-namical pressure of the wind produced by the movement of the machine. The rotor is wholly independent of power from the engine, whose sole function in flight is to propel the Autogiro. There can, therefore, be no cessation of rotation while the machine is in the air.

The rotor is designed to revolve about an axis approximately perpendicular to the longitudinal axis of the machine. The speed of rotation for any given system is defined by its design and is practically constant for all flying conditions. The rotational speed of different rotors varies from 120 to 150 r.p.m.

In straight vertical descent the airspeed encountered on all blades is equal. In forward flight it is obvious that this equality of airspeed is eliminated by a differential of the forward speed which is added to the velocity of the advancing blade and subtracted from the receding one. Unless some means were taken to overcome the inequality of lift caused by this difference of airspeed, the machine would tip in relation to the line of flight: its stability would be lost. The simple and ingenious scheme of hinging the blades to the rotating shaft, so that they are free to yield up and down, balances the dissymmetry of lift on diametrically opposed blades and results in complete stability. The advancing blade automatically rises, decreasing its effective angle of incidence, while the receding blade descends, automatically increasing its effective angle of incidence.

When the Autogiro is in flight the rotating blades are subjected to two major and opposed loads brought about by natural forces. Under the action of lift the blades have a tendency to rise, since they are free to move about the hinge at the roots. This tendency to rise is overcome by the centrifugal force of rotation acting at right angles to the lift force. The equilibrium of the two forces results in the rotor system coning slightly in flight.

The blades are also provided with a second hinge, giving an additional freedom in the plane of rotation. This freedom assures the smooth operation of each blade in its adjustment to varying loads and airspeeds. The principal restraining force over and above this freedom is centrifugal tension which holds the blades in their relative position. Cables are provided between blades to retain this relative position when the Autogiro is on the ground and while the rotor is turning below the rotational speed necessary for centrifugal force to act. Shock absorbers are placed in these cables to protect the blades when taxiing over rough ground during this lower rotation. When the machine is at rest, the blades are supported by cables attached to the rotor head.

This hinging of the blades has the very important effect of eliminating most of the bending stresses. The load is carried by a tension system in which centrifugal force provides the necessary restraint, and prevents the blades from rising under the load. This tension system enables the designer to save much weight and introduce flexibility into the construction of the blades. The flexibility of these blades is an important element of the Autogiro characteristics and is rendered possible only by means of their hinging.

The hinging or articulation of the blades also eliminates all gyroscopic action of the rotor, which is a force too powerful to overcome. This is one of the major reasons why the Autogiro is the only form of rotative wing aircraft that has been successful.

The Autogiro rotor, as a flexible yielding structure is not sensitive to sudden varying loads imposed by bumpy air and gives an unusual degree of riding comfort—a factor of considerable importance in decreasing the possibility of air-sickness.

One method employed for bringing the rotor up to sufficient rotational speed for take-off is the mechanical self-starter. It derives its power directly from the engine crankshaft through a manually operated clutch and brings the rotor up to speed in less than a half-minute. In flight it is completely disengaged and has no connection whatever with the rotation of the blades, thus eliminating all torque reactions found in helicopter experimentation. A simple braking arrangement similar to the familiar wheel brake stops the movement of the rotor after the Autogiro has landed.

The fundamental principles upon which present-day Autogiros are built are not new and untried. The application of these principles, forms the basis of Cierva's "Theory of the Autogiro," an exhaustive engineering treatise on Autogiro design. A study of this theory removes any element of mystery attached to the machine's performance, and enables the designer to definitely forecast the flight characteristics of any Autogiro he may elect to build.