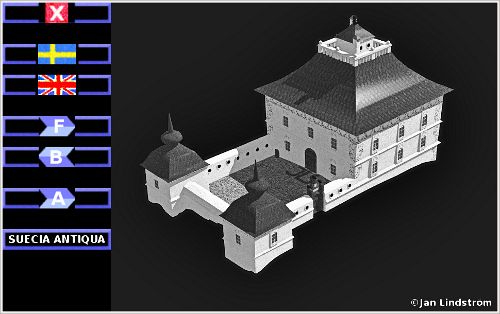 Brahehus give you a roughly hint, to the Swedish 17th century castles original appearance. Built on the edge of a 90 meter high rock face, with a splendid view over the lake Vättern downbelow. Today a ruin, with the highway (E4) passing a few meters away.

The programmes exist in versions for Linux and Windows. Content from this program can also be found in the Android-app JLs3D. Download HERE.

Brahe became Swedens first countship in 1561. The county named Visingsborg. Associated to Brahehus are Per Brahe den yngre (d.y. = Junior) and his first wife Kristina Katarina Gustavsdotter Stenbock. Little seams to be known about here. She meet Per at the Swedish court, and was described as a cheerful person. Not surpricing are there a lot more to know about Per. He became colonel in the cavalry 1628. During 1630 he was active in the big war in todays Germany. After King Gustav II Adolfs death (1632), was he back, this time as an administrator close to Axel Oxenstierna. 1637-41 and 1648-54 occupied as generalguvernör (governor) in Finland. The city Brahestad (Raahe) are named after him. He had position as Riksdrots, for a long time. Before 1660 this title meaning judge of Svea Hovrätt (court). Later as a sort of minister of justice for the whole country.

His rank and position was very important for him. But he has by the sources of his days, a good reputation. What the common people saw in him, may be harder to know.

The real builders of a place like Brahehus will most likely not be known by name. The leader of paintwork indoors and outdoors are anyhow known, Johan Johansson Werner. The position high on a rock face, was hardly a practical place to live. It was still, told to be a residence for Kristina as a widow. Representation and propaganda must have been other key factors to build at this location. The view over lake Vättern are stunning. Brahehus was completed early 1650-s. Then was Kristina already dead. A fire started down in the village Uppgränna 1708, which spread up the rock face to Brahehus. Leaving todays ruin. Restauration- and conservation-works has been performed in steps from 1911.

The basic structure and dimensions are pretty clear. Details are harder to be sure about. The copper engravings of Suecia Antiqua Et Hodierna (books), are not to be trusted. To create 3D-models takes time. And even if more details were added, no one could be sure of the correctness of them. Hopefully will this give some hints to Brahehus in the past.

Alsnö stadgar was signed by King Magnus Ladulås 1280 (or close after). Among other things in this document, gave he exemption from taxes to the nearest men of King and the Bishops. This also to those that could provide a armoured knight with horse, to serve under the King.  A Swedish nobility had formally been created, as it says in most Swedish history books. Though there had to be earlier agreements between King and men of certain positions. This is anyhow the first that have survived in written form, not as original, but as later copies. The peasants remained  still a rather free group, many owners to their farms. Some parts of Alsnö stadgar was also to their advantage.

Later will the Swedish Crown sell land and estates, to the noblemen, often advantageous. This to finance during war or other crisis. Maybe the only way to get cash. This happened most often during Gustav II Adolf and his daughter Kristinas regency. This was not popular amongst the rest of the population, especially the peasants. This politic became in the long run impossible. Leading to The Great Reduction, in Karl XI days. Brahehus became a property to the Crown in 1681. Per Brahe was by then already dead. The sympathy for the nobility was maybe not that high, if common people were asked. 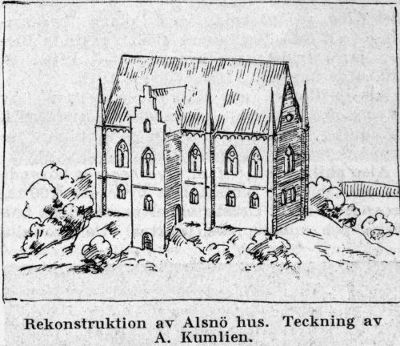 The image comes from the Swedish encyclopedia Nordisk Familjebok (edited 1923-37). The drawing of Alsnöhus, the castle of King Magnus Birgersson (known as Magnus Ladulås), also the place of signing Alsnö stadgar, should be seen as an artists impression. The remains of the building are not very extensive. In the years 1916-20, was an archaeological survey performed. They came to the conclusion that it had been a 30 meter long and 13 meter wide building. In 2 floors with a basement, built with bricks.