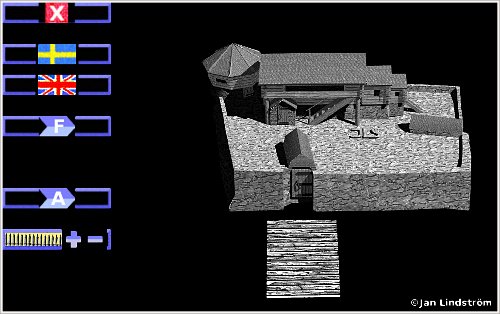 Hultaby gives you in 3D, Hultaby castle (or maybe more accurate, residence), in my view of its 14th century apperance. Today it´s a ruin, just outside the city Vetlanda, Sweden.

The software exists in versions for Linux, and Windows. Content from this program can also be found in the Android-app JLs3D. You can download them from     HERE.

Hultaby, or Hultaboda ö , is today a ruin just outside Vetlanda, Sweden. By natural land elevation, and by work to gain land for farming, are the location no longer an island (ö=island). The construction started probably mid 13th century. It was burnt down during the troubled times the century after. If you should call Hultaby for a castle, a residence, or something else, are uncertain and up to you.

Anyhow is the main building, placed on a by area 30x28 meter large plateau. This is made around a natural rock. The walls are mostly build without mortar. Some parts have though later been reinforced. This between the gates, and around the cellar of the tower.

The building with walls of 4-5 meters, where not the only one existing. Around it was about 20 houses located. Made of wood, and used as working shops, and as living areas.

Hultaby should not be compared with strongholds run by kings, or by feudal lords in other places of Europe. Feudalism never really got the grip of Sweden. This was a private residence, located quite a distance to closest town. And as today surrounded by deep forrests, and many lakes.

The name associated with this place is Erengisle Sunesson. His father was Sune Jonsson, from who he propably inherited Hultaby. He was a knight from 1344, and a member of the kings council in 1350. He lived in troubled times, and got involved in the struggle of the crown.

When Erik the son of king Magnus Eriksson, became a rebellion, had he Erengisles support. Erik died though at 20. Erengisle had to go into exile, and took part in trying to get Albrekt of Mecklenburg, as king. He later changed side, and fought against Albrekt. In this period was probably Hultaby burnt down. Around 1370 it ended with a conciliation, but Erengisle took part in the council that limited king Albrekts authority in 1371.

Through his second wife, the Norwegian Annot, got he also a position in the Norwegian council. Here father Malise, used the title Jarl of the Orkney Islands. Erengilse inherited this in 1353. He have though no real influence over the territory. He was probably never there. Erengrisle died in 1392. He was layed to rest in the Vadstena abbey. Hultaby was mentioned in his will.

This is my view of Hultaby in its best days. It´s hardly an exakt description. I am no expert in the field, only with some interest in older days. On the other hand, will you find nobody now living, that can in detail describe this structure. So take it for what it is, a somewhat careful guess.

When the restauration of the castle started in the 1930-s, was the walls in pretty bad condition. The basic shape should though be clear. The relative high tower that have been imagined, should have needed a large base. Any sign of such is missing. Unintended if the remainings of today, was a well, or a cellar to a tower, or something else, so would it probably had a cover. As an compromise, have I made a lower round building. The main house was in 3 joint sections. I have chosen to gradually made them lower.

The stair in the end is my idea. A building of this size, would propably had more then one entrance. If the gates have been covered with arches of wood are uncertain. Many nails have anyhow, been found at the minor one. One last question is the exsistence of any wooden palisade. If not was the edge ontop the wall, probably only about 0.5 meter high. Hultaby was never any real stronghold, and there are no traces after a fence. But any wood from this period will anyhow be long gone. To get a view of Hultaby, with or without a palisade, can you turn one on and off with a button in the menue. 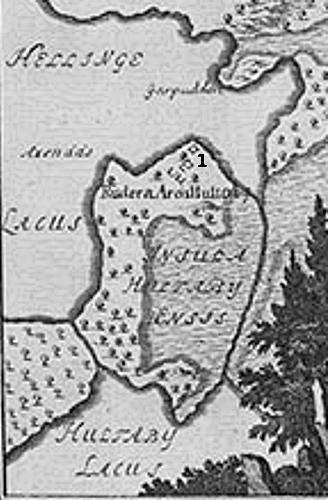 1693 came regementkvartermästaren (old sort of officers rank) Petter Rudebäck and surveyor Jonas Duuker to Vetlanda. They had been send by county governor Erik Dahlberg, to find and register the local ancient monuments. This for the book Suecia Antiqua Et Hodierna, which was to glorify Swedens past and then present. The most interesting for them in Vetlandas neighborhood, was the tall tales about the long gone city of Vitala. In the stories could someone just dig one and a half kvarter (22 cm) into the soil, and then find remains of paved streets and basements. Belive it if you want.


Jonas Duuker made a drawing in form of a map over Vetlanda. This was engraved as copperplate in 1709. In this case is the most interesting that Hultaby is present (1). Lacus is lake in Latin. Insula is peninsula. Not very hard to translate into English. Hellinge lacus is today named Norrsjön and Hultaby lacus is Grumlan. The peninsula were Hultaby is located was then Insula Hultabyensis. This map was made about 330 years after the buildings was burnt down, so the natural elevation of land had probably already changed the scene. You can though see that the area towards Vetlanda (right) is waterlogged. 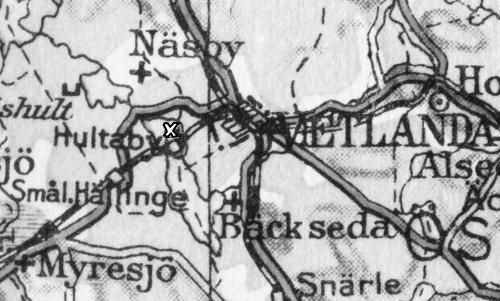 In the Swedish encyclopedia Nordisk Familjebok, edited 1923-37, is a map over Småland included. Here cut to just the area around Hultaby (the white x). The railroad is now passing by, as it has since 1885. The modern road west from Vetlanda has yet to be built. You needed then to take the trip around the Norrsjön. 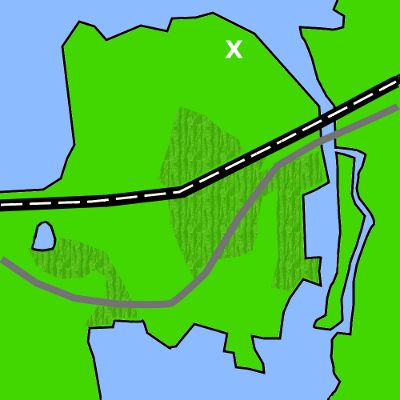 And this is the changes into more recent times. The new road goes close by Hultaby. The trains has not been running for many years. The embankment though now used by bicycles and pedestrians. Land elevation, and during the 19th century regulations of water levels, has made the land dryer. Some places on the map are still marked as marsh. If Hultaby was located on an island or peninsula, when it was built, is for me an open question. 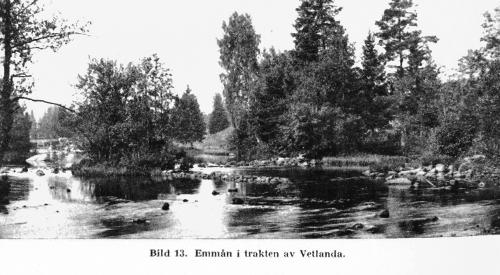 The image above shows the Emån river running just outside Vetlanda. It comes from the earlier mentioned Nordisk Familjebok. The name is here spelled with double m. Which in a way can be right, as it agree with the local pronunciation.

The surroundings of Vetlanda includes a number of grave fields. Mostly from the latter part of the Nordic Iron age. But also some from the Bronze age. The grave fields of Byestad, ranks as the biggest in Småland. It is located close by the Emån river. Probably could people by boat, travel all the way to and from the Baltic see. It is likely that the inland of Småland early on was populated from that direction, at least to some extent. The woods was deep and the terrain rough. Many watercourses may also have been cumbersome to pass. In the days of Hultaby, which not extremely back in time (13th-14th century), was there probably anyhow "roads" not far away. One should have connected the West and East hundred, that together was Njudung. Vetlanda was some sort of junction, and a place for fairs.