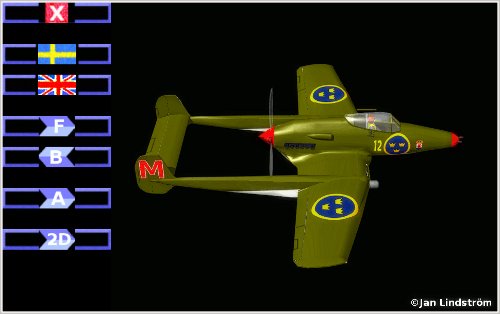 This program (or app) includes 3D-images, depicting J21B. A version of the Swedish fighter, that never came further then a wooden mock-up.
Download HERE.

Thulin K originates from 1916. It was never armed in Sweden though. Thulin N and NA, had potential, but remained prototypes. Södertelge verkstäders SW15 became airborn in June 1917. The design led to a bad landing, and a lost pilot. FVM J23 was a handsome aircraft, but suffered from fatigue. Trying to improve it (J24 and J24B), failed. 1930 was the last year of service for J1 (Phönix 122), J2 (Nieuport 29) and J3 (Fokker CV-D). J1 had its roots in WW1. J2 was a poor construction. J3 was in reality a reconnaissance-type, with shorter span. Calling J4 (Heinkel 19) a fighter, needed some optimism.

1930 onwards saw service from J6 Jaktfalken and J7 Bulldog. One Swedish/German aeroplane, and one British. Aircraft-design took in the 1930-s, big leaps forward. Leaving aircrafts from this period, quickly obsolete. The Defence Act of 1936, resulted in 4 Wings for bombers, and 1 for fighters. The last one with J8 (Gloster Gladiator). 1939 was 264 fighters ordered from USA. 60 J9 (P-35) arrived. Saab had a project L12, and Götaverken one GP9. The latter one supposed to make 680 km/h. Neither was built.

In beginning of WWII was the Italian J11 (Fiat CR42), and J20 (Reggiane 2000), bought by Sweden. Not for being the most wanted. The latter one anyhow, not to bad in flight. The man behind GP9, Bo Lundberg, came back with FFVS J22. The first Swedish fighter built in numbers. Saab had while working on L12, also a project named L13. This will be the J21. Special features spoken for, was concentrated armament, good sight, and safe landing-characteristics. The L13 was halted for a couple of months, when the authorities got cold feets.

J21 became conguerer with maiden flight in July 30th 1943. Mistake in the start, made also the landing less good. The engineers was not fully understanding this new types features. At the end, became J21 a rather sturdy aircraft, with som advantages. It could be fairly agile, under some circumstances. It was also a stable platform for weapons. One problem was to cool the engine. Which seams rather obvious. This was not perfect for the ability to climb fast. The nose-gear could have been stronger. The controls was to heavy, for a really good fighter. In the whole, was it more of an attacker, which also became a vital part of its service.

During 1945 was a development called J21B, under work. Changes being a drop-shaped canopy, and a pressurized cabin. The Daimler-Benz DB605B engine should have been kept. Though early on a Merlin (or Griffon?) was discussed. Later on a E-version of the DB605 (+ 300 hp). The engine-covers was to be changed, uncertain how. The booms was to be wider in the front end. This to hold equipment as radio, and in the right, also radar. The canons would all be 20 mm. Mostly internally, additional changes was to be done. Production was calculated to be 180.

A wooden mock-up was built. This being as far J21B came. In November 1945 was the project closed. The jet versions of J21 was then built. Not more then 64, before all focus was on the coming J29 Tunnan. This 3D-model is of course not perfect. No J21B was ever built. The most notable on a J21B, would probably have been the canopy. This may be possible to imagine. The markings Red M, comes from an existing J21A at F12 Wing (Kalmar). It ended its days in a hard-frozen pile of snow. This while pilot taxing from runway.  The braking hoses had failed. Maybe depending on the very cold weather. 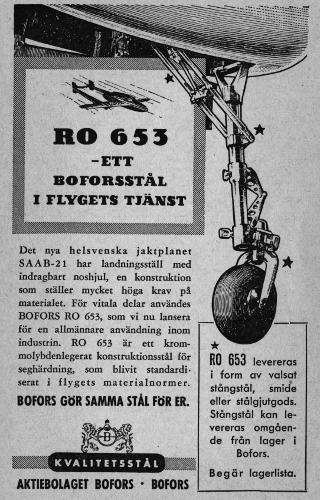 Bofors supplying steel to the undercarriage of J21.

In the pilot-instructions of how to deal with J21, included the Swedish Airforce (Flygvapnet) a kind of cartoons. 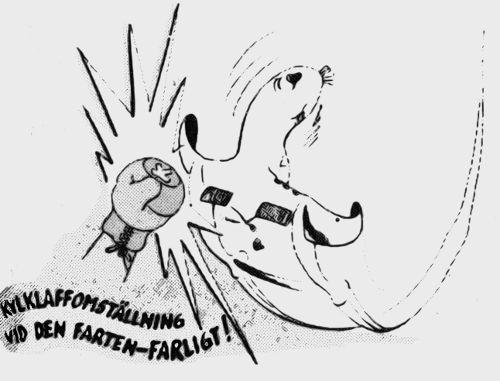 J21A had normal flaps both inside and outside the booms. At the inner ones were there also flaps for cooling. The systems was a bit different on J21A-1 and J21A-2. At the latter was the cooling for oil and water/glycol separated. The flaps could be activated during flight. But not at any speed. This here made symbolically clear by the appearance of a pugilist in the sky. 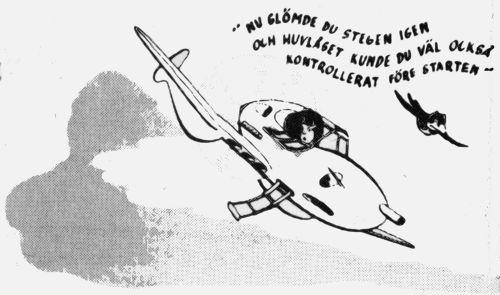 Saab 21 had an built-in retractable ladder, intending to make the aeroplane more independent of equipment on the ground. It was also some way up to the cockpit. The ladder was telescopically retractable, this in 3 sections. It happened though that it folding out during flight. The design cant anyhow have been 100%, and it's always easier to blaim the pilot. There was also warnings regarding the canopy. 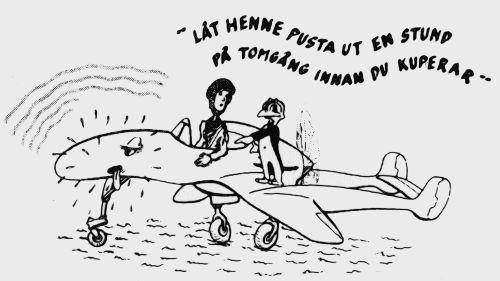 When the pilot safely was back on the ground, should he keep the engine at idling-speed for a while. The aeroplane had 2 built-in cooling-fans that started automatically, when rotations drop to 1800. This was not always enough, especially during warm summer days. The mechanics has then to roll out the water-hoses.