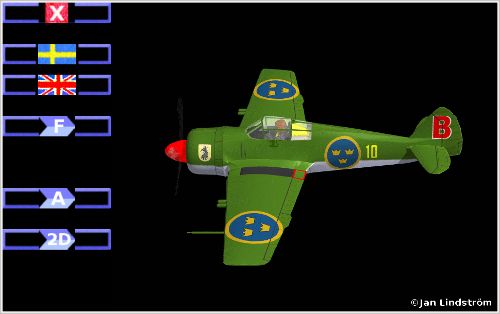 Is an program that describes the Swedish WWII fighter FFVS J22. Downloads are HERE.

The design of fighter aircraft advanced in big steps around the mid 1930-s. Biplanes being replaced by monoplanes. Retractable undercarriages, enclosed cockpits and costant-speed propellers, became standard features. Douhets ideas of bombers being impossible to stop, became less true. Sweden has after much agony decided to set up its first fighter-only Wing. For that purpose was in 1937 Gloster Gladiator procured. A plane with nice characteristics, but a biplane with fixed undercarriage.

When the winds of a coming war became stronger, had Sweden to speed up to acquire new fighters. An order placed in US gave 60 P-35, before Roosevelt put an embargo on the rest. From Italy came Reggiane 2000 and Fiat CR42. The first with decent performance, but not so well built. The latter purchased because nothing else where aviable.

J22 was an project to be activated if no more fighters of decent quality could be found abroad. Swedish SAAB was fully occupied with their own B17, B18 and J21. They also build B5 (Northrop A-8) and SK14 (North American NA-16) on license.

The designer Bo Lundberg start to work on J22 in 1940, when he was stationed in the US. The conditions was to avoid use of duralumin. The quantity aviable was needed by SAAB.

To build in steel and wood was no novelty. Then often with a body of steel and wings in wood. The J22 however used an all steel structure, covered with wooden-panels. The patented method to assemble these panels, gave some flexibiltity to the joints, easier and faster to work with. The joints where also covered by glued strips of fabric. The wing was welded in a water-cooled robust jig. The undercarriage was rotated and then folded into the fuselage. This gave a stronger wing, but a narrower track. Control surfaces was made of a steel frame covered by fabric. Twin Wasp of 1065 hp (original or copied) was the power plant. This also on J9 (P-35), which was about 100 km/h slower. Twice the air resistance. 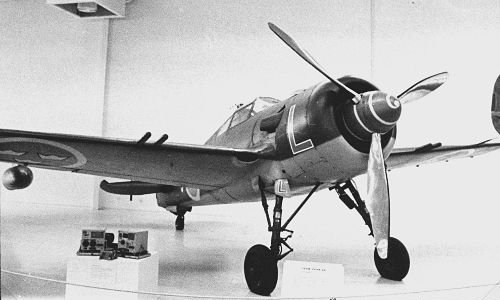 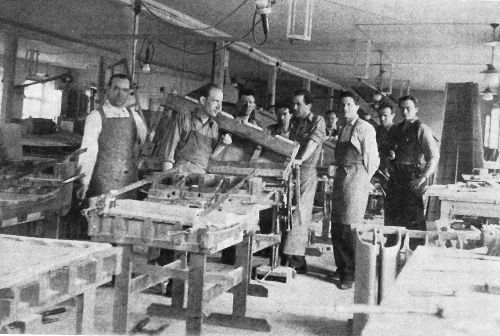 Svenska Möbelfabriken (Swedish Furniturefactory) in Bodafors (Småland), was one of two companies that produced the wooden-panels used on J22. The material was plywood of birch from Finland. A product that have been a specialty for that Nordic country. To fastening the
panels with the underlaying steelwork, Lundberg invented a system (patented) that had some built-in flexibility. Wood has the habit to move with heat and humidity. The joints between the panels were when fitted, covered with glued stripes of canvas. His patent were never again used on aircrafts. However he was much later talking in favour of reuse the method in a more modern form. Then with panels in carbonfibre composite. 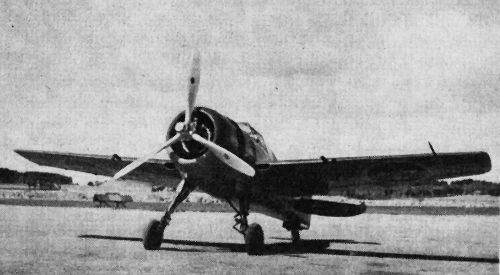 The image above and the following short text, was the only visible in the pocketbook "Flygboken" from 1945.

An caricature of J22 from 1946. Possibly inspired by the statement that J22 was the fastest aeroplane, compared to number of horsepowers. With more humour it was also claimed, that it was the fastest in relation to the track of the undercarriage. 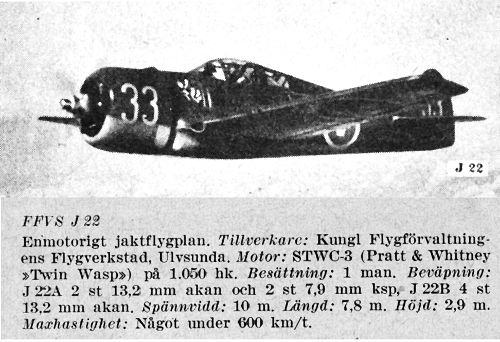 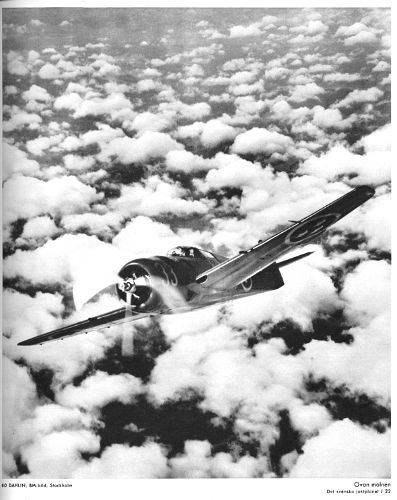 Image published in the Swedish magazine Foto (Photo) 7/1945. Photographer was Bo Dahlin, the picture named "Ovan molnen" (Above the clouds). 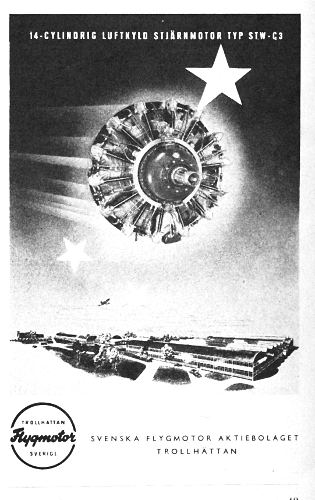 Advertising for the the Swedish copy of Twin Wasp (the engine in J22). 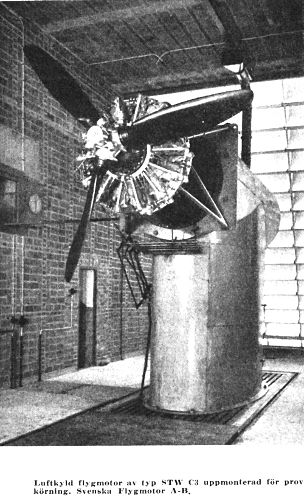 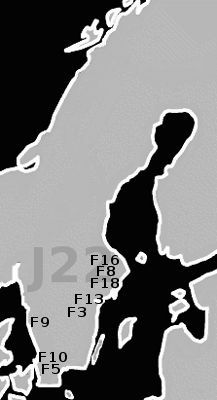 Following Wings of the Swedish Air Force had J22 in there squadrons:

F3 Malmslätt
1945-46 were a number of J22 rebuilt to act in the role of reconnaissance. 1948 was the Wing converted to a fighter one, and the J22 came back in its primary role. These were in service until the last days of J22 in 1950-52. Then following the so called Q-plan. Which were the Airforce intention to quickly replace older material with newer (jet). J22 was here followed by J28 (deHavilland) Vampire.

F5 Ljungbyhed
This was a Wing dedicated to training new pilots. However a number of J22 were on lease, for a period in 1947-48. This to perform advanced exercise for the teachers. They were replaced by J26 (North American) Mustang.

F9 Säve
This Wing was the first to receive J22, then in 1943. Previous they used J11 (Fiat Cr 42). The latter an investment of necessity, when not much else were available. 1945-46 were all squadrons at the Wing equipped with Saab J21A.

F10 Ängelholm
During most of the war they been flying J20 (Regianne Re 2000). The geographical position led to much work with intercepting, over or close by the most southern parts of Sweden. The doubtful manufacturing quality of the Italians also added into fighters that was worn, when finally replaced by J22 in 1945. In 1951 followed Saab J21R, Swedens first domestic jetplane. It was to be rather short-lived.

F16 Uppsala
1944 became F16 the second flottilj (Wing) receiving J22. Earlier on they used some J8 (Gloster) Gladiator. Those more as something to practice with. Already 1945 took J26 Mustang over.