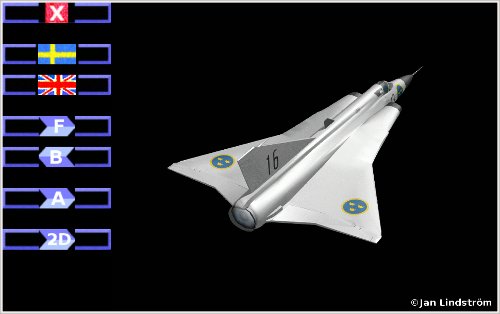 1949, before J29 Tunnan was in service, a Swedish Airforce specification to construct a new fighter, was handed over to Saab. It should be able to fly Mach 1.5, intercepting bombers at high altitude. It should have then been driven by the Swedish engine Glan. Later (no surprise), demand for low altitude performance, was added. Early was there several propositions. One looked like a pilot-only, slimmer 32 Lansen. Another more of a Mig-21. The most promising shape came though to be the double-delta. The military insisted then, that the fighter should in any case have a tailplane. Saab starts then to produce false drawings, to show at occasions. This until they convinced the costumer.

The new double-delta shape, was tested with models, but also with a small aircraft Saab 210 Draken (not named by Saab). This later called Lilldraken (lill short for lilla=little). Draken in this case translates into kite. Can also be dragon. Tunnan, Lansen and Draken had all names referring to their shape. Viggen and Gripen came from mythology. As seen above may Draken be placed in both categories.

The first delivery of J35A was in 1959, this to F13 Wing (Norrköping). In a hurry, as the first came without any radar. Later J35A got French Cyrano (Mirage III). The Ericsson radar was delayed. The avionics of A became something of take what you have quickly. Even J35B had to wait for much of its then more advanced equipment. Electronics in those days took leaps forward, and the Airforce had trouble to make decisions.

The first J35A had a short tail (afterburner ebk 65). When ebk 66 was introduced the ending of the fuselage had to be extended. A retractable tailwheel was also added. Some of the short aircrafts was later converted to trainers.

In 1960 came the first accident, with what was to be named a superstall (high angle of attack, speed forward dies). Something similar had once happened with Lilldraken (happy ending). Then not taking it seriously, as seen as unusual behavior. In 1961-63, a substantial number of testflights, including superstalls was recorded. Also models in scale 1:6.5 was dropped from helicopters. This even in England. The results of this was instructions to the pilots, that took control over the problem.

The first J35B flight was in 1959. This version had Ericsson PS-03 radar, and Saab S7 sight for collision course intercepts. But this equipment was delayed, and not mounted until afterwards. Externally was the J35B very similar to A. The 14 of January 1960 flew a prototype Mach 2. SK35C was a trainer, made from converted J35A.

J35F was a further development of D, with hotter avionics, and Hughes Falcon missiles. Regarded for some time, as the most advanced allweather-fighter of European design. From 1986 were 66 J35F upgraded to J35J. The only surviving Swedish Draken-Wing was then F10. J is the tenth character in the alphabet. In total had the Swedish Airforce (Flygvapnet) 540-550 Drakens in service. J35 was exported to Denmark, Finland and  Austria. Most of the Finnish, and all of the Austrian, were though modified second-hand ones. 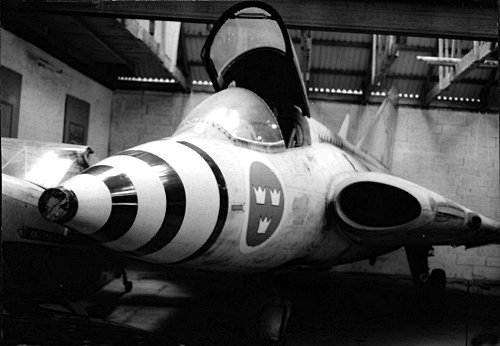 A prototype of J35A Draken. The photo taken while the aircraft still was more an item of storage, then exhibition. This at Svedinos Museum in Ugglarp (between Falkenberg and Halmstad, Sweden). 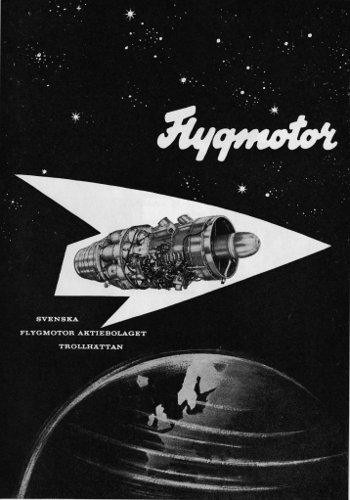 Advertising from Flygmotor. The company produced the engines for Lansen and Draken. They were licensed copies of Rolls-Royce Avon. This in several versions.

Allhem publishing house (Malmö,Sweden), existed between 1932 and 1981. They produced a range of books and encyclopedias, with some quality. Quite a few about aviation. 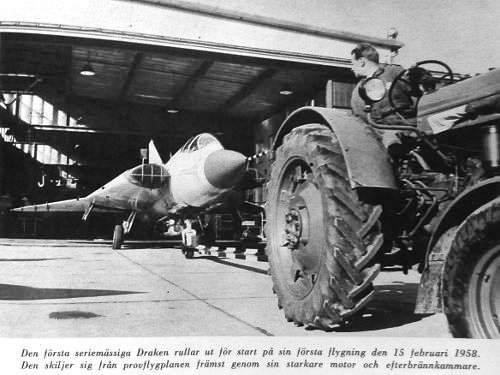 Among the titles was "Ett år i luften" (One year in the air). First edition came in 1949. During the 50-s they were annual. Later in the following decade, more irregular published. Contents was both military and civil. The 1958 edition had J35 Draken in a rather considerable role. In the books about 300 pages, occurred the fighter in several articles with circa 25 images. Including the one above. That showing the first J35A towed out from the Saab works, February 15th 1958. Test flight waits. The text now following, is this authors short review of the content.

In August 1956 had the Swedish Air Board ordered the first batch of J35A. Now was the first of those fighters, close to be in service with the Swedish Air Force (Flygvapnet). They were to be able to fly in Mach 1.8 and climb 200 m/s. In the same time was a new version under way. This with higher speed, missiles and the new sight for collision course attack (Saab S7). The latter usable without higher speed then the target. This was now said to, in practice, eliminating the risk of self being hit. Maybe not completely correct, if some objectivity should be added.

When this book was published, had Draken been airborne for 3 years. During this time had it, as stated, presented excellently. It had fully lived up to the high expectations. Low drag gave high speed and the behavior at low speed was good. It was claimed that Draken had a bigger "speed area", then any other aircraft. By this meaning the gap between lowest and highest possible speed. Since the spring 1956, had most of testning been in around and above the speed of sound. J35 was easy to land, this even compared with 32 Lansen. Draken had also been tested in Saabs climate-chamber. This in temperatures down to minus 70°C, and pressure comparing to 30 000 meter.

The stall-limit was 210 km/h, though landings at 190 km/h during tests had succeeded. It was claimed that J35 "in normal conditions", couldn't be uncontrollable. This was obviously written before the problems with super-stall. Draken needed no longer runways, compared to its predecessors. For this statement did they hopefully, excluded aircraft from the era of propellers. J35 could though land in 450 meters, if using braking parachute.

In the wings were glued panels of honecomb-type used. This method had been tested at Saab years before. Another novelty was the internal frames. Those were named "ringspant", ring telling something of their shape. They formed the middle- and rear-fuselage. To produce them
was, as told in the book, a new unique type of milling machine constructed. The tooling for J35 Draken went for several millions in Swedish kronor. The total number of them was 25000. Those for machine-works 5000. 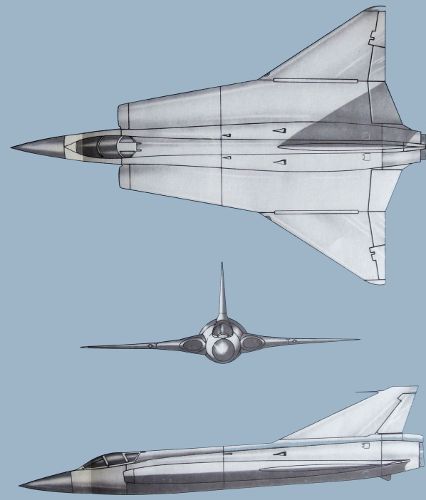