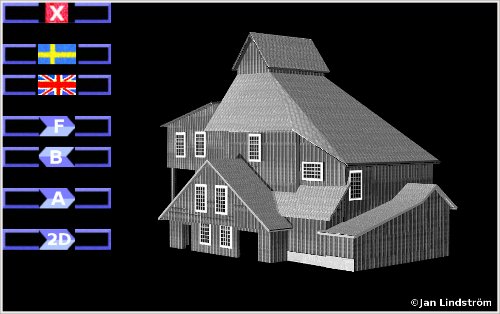 This is a strange looking building, once constructed in Ädelfors, close to Vetlanda in Sweden. The 3D-model in this program should fairly depict laven over the Adolf-Fredrik mine. A lave is a wooden building covering the mouth of the mine. Here also called uppfodringsverket. Then referring to whats inside. Uppfodra = lift up, verk = machinery.

In the surroundings of Vetlanda in Sweden, can you find several old mines. Most of them not very productive in a more modern perspective. Kleva was the number one, mining copper later nickel. This is about the goldmine at Ädelfors.

Known from late 1400-s as Diwgaforss. Later Gyafors. Gya refer to the bird osprey. Fors means stream. One Henrik Leyen should have found gold here in 1581. Nothing really happened though until the forester Nils Stenberg and farmer Germund Jonsson found something shiny. The sample was send to Stockholm. The result was 10 lödiga marker + 2 lod gold. And also 2 2/3 lod silver. Mark was a currency in 1536-1766. Lod was a measure of weight. A delegation was send to the location, and more was found.

The king changed the name Gyafors to Ädelfors (ädel=precious). A company was formed as Ädelfors Societeten. The latter soon got new owners, and Kleva was also bought. Stenberg and  Jonsson was rewarded with 2000 daler (another currency).

Work started in may 1739. The company soon find that it was harder then imagine. So Crown took over 1743. Older production gave 1-2 kg a year. 1741 visited Carl von Linnè, both kleva and Ädelfors. 1801 was the mine let out on lease. 1822 took the Crown over again. Two years later was a decision made to shut down the whole thing.

About 1870 tried a Baron von Schulzenheim a go, but failed. Just after that was the mine bought by Lessebo Bruk (company), for little money. Work then started in a small scale in 1890. A consul Beiber run then the mine more actively in 1896-98. Statements about total production variates, but can be about 222 kg. Much of it during later years, using more modern methods. The mining area includes about 330 hål (vertical shafts) and stollar (horizontal). The gold was in the 18th century used for dukater (coins).

In more resent times has tourists been able to walk in the shafts of Kleva, or panning gold at Ädelfors. The miners that once created all this, had a hard job, wort to be remembered.