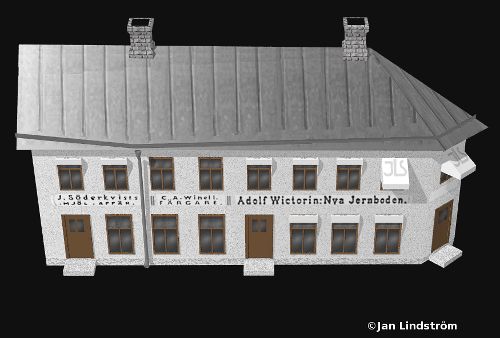 This is an PDF file including 3D-images of an house located at the square in Vetlanda (Småland, Sweden). This as it was in the years around 1900. Can be downloaded HERE.

The image used as a template for this 3D-model, may be from June 11th 1902. Place being a market day in Vetlanda (then Hvetlanda), Småland, Sweden. Photographer likely Nanny Ekström. However there is another photo, from a slightly different angle, where the then living had moved. But also clear is that it has been taken the same day. Dating is now to be 1896. Nanny came from Oskarshamn in 1895. Working as an assistant first, as her own from 1902. In a third photo can we see a snowy Vetlanda square during winter. The house of our interest has been extended, got a fancier painted facing, and a balcony in the corner. The Söderkvists flour store and the dyer-works Winell is now gone, the hardware store Jernboden has expanded. All obviously later, but dated to around 1900. This makes dating the images somewhat uncertain.

Gustaf Adolf Wictorin (1860-1905), didn't live long after these photos were taken. Claes August Winell (1829-1927), survived almost a century. This 3D-images show only the face towards the square. One in 30° angle from above, and one at ground level. The building goes round the right corner. The house appearance in about 1900, beats without any competition, how it looks today. 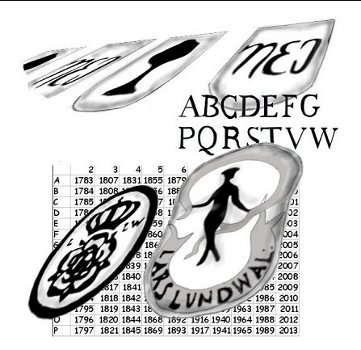 Describes the history behind the Swedish system with pewtermarks. Also included are a list of yesterdays masters, from the authors province (Småland). Some examples of their marks can also be found. Exist also in a version with Swedish text.

Those Swedes occupied with making pewter was organized in about the same way with masters and guilds, as in other European countries. The following text comes from the in 1905 published book: OLD PEWTER, BRASS, COPPER, AND SHEFFIELD PLATE by N. Hudson Moore. The selected parts here seen, gives an historical view on pewter and pewterers, mostly French. All not directly connected to the conditions in Sweden, but can be interesting to read anyway.

For use at home, the Romans carried tin from Cornwall both by ship and overland, and when material for the proper alloys failed them, they made pewter of pure tin. The metals were transported in the form of ingots, and not only did Rome get her share, but France too, received her quota, by means of either caravan or boat. Holland got hers through the city of Bruges; and Barcelona sent out so much to Venice and other parts of Italy that it was found necessary to regulate the trade, and as early as 1406 the first of these regulating statutes was framed.

The word "Pewter" has its equivalents in many languages, peautre dating from 1229 in France, while the Dutch used speawter, or peawter, and in old English inventories I find it spelled in half a score of ways, according to the fancy and degree of education of the writer.

The French, ever more elegant and refined than the English in matters relating to household furnishing and domestic utensils, had fine pewter in their homes before it was made in England. By 1390 not only the nobles, but the wealthy ecclesiastical dignitaries had large supplies of pewter plate, and in 1401, Isabeau of Bavaria, wife of Charles VI of France, bought for her kitchen nine dozen dishes and twenty-three porringers.

In 1500, in Paris, it was stated that the necessary number of pewter dishes for a state dinner was six dozen large porringers, the same number of small plates, two and a half dozen large dishes, eight quart and twelve pint tankards, and two dishes for scraps for the poor.

The period of the most showy development of pewter began in France about 1550, and Francois Briot was its most celebrated worker. Originally a maker of dies and moulds, he became a worker in metals, and wrought with the greatest success in soft alloys. Examples of his work are to be seen in many of the museums of Europe, and his most noted production was a flagon and salver, with figures, emblems, masks, and strap-work. These elegant pieces were cast in sections, joined together, and then finished in the most careful manner in delicate relief.

Francois Briot was followed by Caspar Enderlein, a Swiss, and by 1600 the Nuremberg workers entered the field with richly worked plates and platters, those with religious subjects being used as patens, while those with secular designs were for ornament on the heavily carved dressers of the middle classes, in imitation of the collections of gold and silver plate which were displayed by the wealthy nobles. These ornate pieces, if of French origin, were called by the specious name of "A fagon d'argent" and, like the modern "art novelties" from the same source, brought good prices.

During the century from 1680 to 1780 much pewter was made in France, though the greater part of it was made in the first three-quarters of that time. Louis XVI appointed a royal pewterer, and he made the nobles give up to him much of their silver plate. To make the use of pewter more satisfactory, he granted special permission that it might be adorned with gold or lacquer, which privilege had hitherto been given exclusively to the dignitaries of the Church. As in England, French workmen had been gathered into guilds or corporations, but these were abolished by Turgot on the ground that the free right to labour was a sacred privilege of humanity. With the dispersion of the guilds the quality at least of the pewter declined, and, though it kept its place among the middle classes, with the wealthy its use was relegated to the kitchen. Then, too, after 1750, the use of pottery and porcelain gradually increased, and the beauty of these wares made them easily favourites.

As a proof of their skill the French workmen had to make a piece of the ware of the class to which they belonged, before they could be admitted to the Guild. They were divided into special classes as early as the fourteenth century, and the "potiers d'ctain" consisted of three classes : those who made vases, "potiers dit derond," then those who made the hammered ware and had to present a dish or bowl as a specimen of their work, and were known as "les potiers maitre de forge," and lastly the "potiers menuisiers," who made little things like pilgrims and beggars badges, toys for children, rings and buttons, and who had to make for their entrance piece an inkstand or a saltcellar.

Many of the rules which governed the French pewteres were substantially the same as those which were in force in England. In fact the French claim that the English pewterers took their regulations as the model on which they framed their own rules of the Pewterers Company. In 1613 Louis XIII gave a set of statutes to the French pewterers, at the same time that he gave a set to the Guild of Armourers. Before a man was qualified to become a master workman, he was obliged to serve an apprenticeship of six years, to serve three years as a journeyman, and then make his admission piece. The sons of masters were exempt from serving an apprenticeship, provided that they worked three years with their father. They did not have to make an admission piece and they did not have to pay dues.

As in England, each pewterer had to have his private mark, which was registered with the King's Procurer as well as in the guild room. Each master had two marks, the larger containing the first letter of his Christian name and the whole of his surname, while the smaller mark gave only the initials of both names. Besides this, each mark contained the device of the master, the choice of which was left to his own fancy.

The master pewterers were allowed to make all kinds of work provided that they used fine and resonant pewter, alloyed with copper and bismuth. It was, however, forbidden that they should use either gold or silver on their pewter ware, except such as was intended for use in churches.

In 1776 the guilds of pewterers, coppersmiths, and scalemakers were all combined, and from this time on the industry of pewter-making slowly and steadily declined.

In Germany the chief places where pewter was made were Nuremberg and Augsburg, records of enactments at the latter place showing that the pewterers workshops were inspected by the masters of the craft as early as 1324. Nuremberg had her famous workers too, at this time Carel, and Sebaldus Ruprecht being among the best known. One of the earliest ordinances regulating the making of pewter in Nuremberg is dated 1576. In this it is expressly stated that pewterers were forbidden to make anything with English tin or beaten tin, only pure tin being recognised, without the addition of any lead. Such articles as were made according to these regulations could be marked with an eagle and a crown, while those which were made after the English fashion were to have, in addition
to the eagle and crown, a rose as well.

Each member of the craft had to make a sample plate and have it approved by the master craftsmen, after which he was allowed to punch it with his private mark, which consisted of the eagle (the town mark), in the field of which he added his own device. The plate so marked might then be hung in some public place where his mark could be seen and noted, so that his ware could be recognised by those who had it in use in their households.
Apparently this was as near as it was allowed for merchants to advertise their wares. The ordinance closes with this order:

The masters must go at least four times a year into all workshops, cellars, and shops, to see if the alloy is pure. If they find in their inspection defects in work caused by careless casting or had turning, the article is to be broken up, and if the pieces weigh more than half a pound the owner of the workshop is to pay a fine of one twelfth. If the pieces exceed half a pound in weight, they are to be put into the melting-pot.